Did you ever wonder why at school they taught us the 1-12x tables? I often used to wonder about this as I thought that 1-10x tables were enough or if you were going to learn up to the 12x table then why not 13 of higher as well. I believe that I know now the answer to this rationale. It lies in the fact that the old pre-decimal currency that Australia used was based around a system of 12 on the lower denominations of coins. I can recall the moment in my primary school math class when everything that was so baffling and hopelessly confusing vanished and I was then schooled in the new decimal system. I was an instant genius by comparison to the week before. It was in fact a highly complicated system so I guess we are very lucky to be now using decimal currency.  Just how did the old Pounds, Shillings and Pence work is a question that I have heard many times? I will attempt to answer it here.  ‘Attempt’, being the operative word.

Firstly, a little history on the origins of money usage of the pre-decimal currency in emerging in colonial Australia.

Australian colonisation first began in 1788 with the arrival of the First Fleet made up of 11 ships, 1487 people of which 759 were the first group of convicts to be transported down under. Originally it was thought that the colony could survive on payments made by way of kind for food and supplies in return for labour. The initial period however turned out to be greatly more difficult due to the harsh climate and crop failures. Eventually traders began to bring supplies from other places but the people of the newly founded colonies had no money that was recognised with which to purchase the goods.

On the request of Governor Phillip the British government sent a ship to the colonies with what is believed to be 4500 Spanish dollar coins that he could distribute for use as a currency base. Unfortunately the number of coins sent was insufficient to meet the trading needs of the people and so the widely used practice of cutting the available coins into smaller pieces was adopted. The coins were cut firstly into 4 sections and then some of those quarters were again cut in half to produce approximate eighths. Hence we have the term from the days of the pirates and the Spanish Main, “Pieces of Eight”. 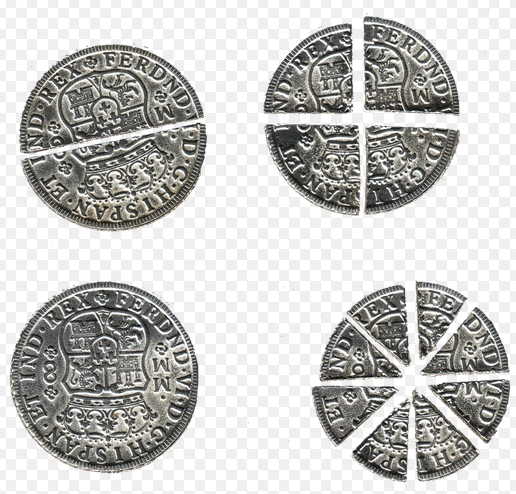 Spanish dollars cut into various denominations of worth.

The Spanish had long since been active in the Americas and hence the one eighth sections were known there as “bits” and 2 bits made a “quarter”. These terms are still used in America today although they now refer to American dollars with the quarter equal to 25 cents. The coins were also cut into thirds with a one-third piece being worth six pence and a two-thirds piece being worth one shilling. This method of dissecting the coins worked well initially but eventually the coinage or segments of it ran out. Due to trading with ships from overseas for supplies the colonies were infiltrated slowly with a huge range of foreign coinage. The additional coinage was naturally welcomed and each type was allocated an approximate British pounds sterling value. The downside of having so many varied coins and values, depending on which country the coin was from and its denomination, led in turn to a great deal of confusion and imbalance in the financial system.

After Governor Lachlan Macquarie took up the reins he was sent a shipment from England in 1812 of some additional 40000 additional Spanish dollars. 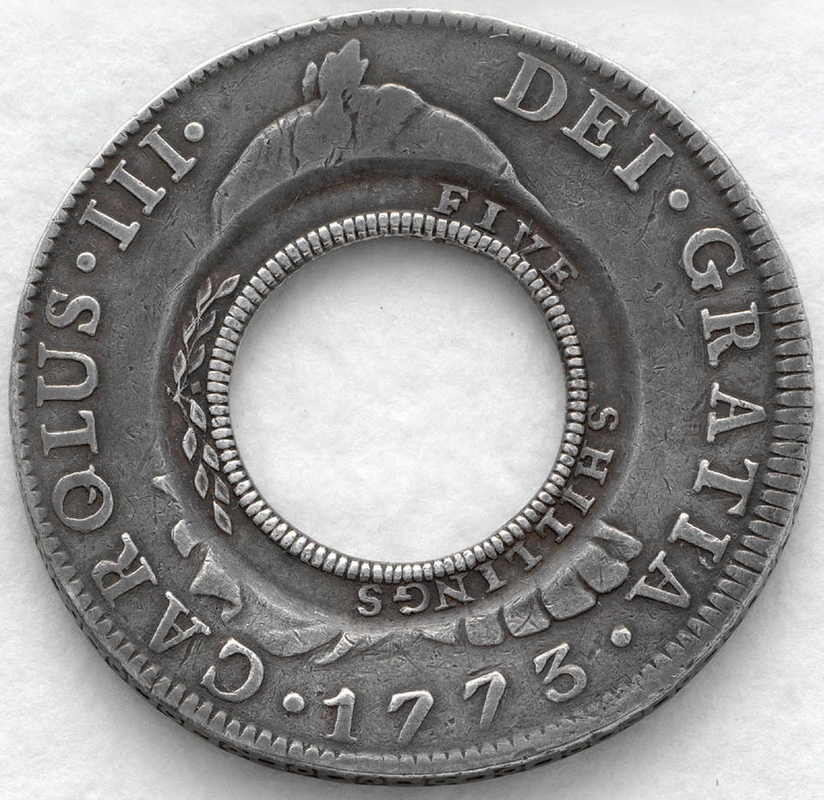 His mandate was to ensure that the coins remained in Australia. Necessity being the mother of invention, Macquarie employed the skills of a local silversmith by the name of William Henshall to rework the coins and make them uniquely Australian. Henshall did this by punching out the center of each coin which resulted in a small centre piece and the residual coin with a hole in the middle. The coin became known as a “Holey Dollar” and the center piece was called “a dump”.

Both piece were stamped with their respective value, the Holey Dollar being worth 5 shillings and the Dump being worth one shilling and sixpence. 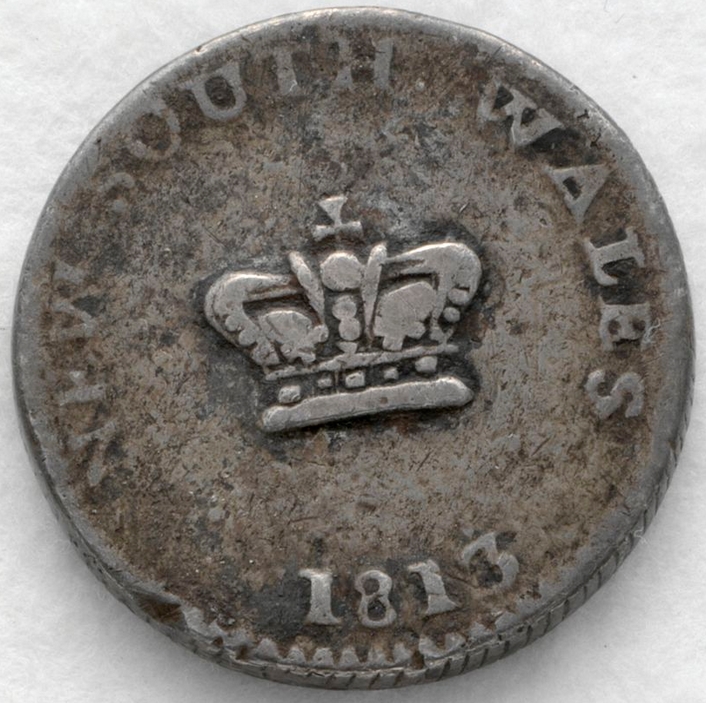 From this point on things really started to get organised and eventually the full British monetary system of Pounds, Shillings and Pence was introduced with all the respective coins and bank notes. Now we come to the fun bit. How did it all fit together?

L – was for Libra which is a one pound weight in Latin and also Latin for Scales
s. – is the abbreviation for Shilling in English from the Latin Solidus
d. – from the French denier and, from the Latin denarius (the solidus and denarius were Roman coins) denarius or denarii, a Roman coin which here represents Pence.

There were 12 pence to one shilling and 12 Farthings in a Six pence and this is one reason why the 12 x table was so important. This and additionally the fact that there were 12 inches in a foot and a square foot was 12 x 12 or 144 sq inches. 12 to the dozen is another example.
The lowest denomination was the farthing. (Most amounts had to be reduced to this to do division and multiplication.)
Two Farthings made One Half Penny (the phonetic for this was hape-nee)
Two One Half Pennies made One Penny or 1d
12 x One Penny made a shilling or 1s or 1/ it was also referred to as a “Bob”, hence the scouts with their “Bob A Job Week”
2 x Pennies made Tuppence but this was a term and not a physical coin.
3 x Pennies made Three Pence – 3d – (the phonetic for this was Thrip-pence)
1 x Groat was worth four pennies or a third of a shilling.
2 x Three pence coins made Six pence – 6d or the slang term Zack
2 x Six Pence coins made One Shilling.
5 x One Shilling was One Crown and there were 4 crowns to One pound
10 x One Shilling was worth a Ten Shillings banknote or 120 Pence
1 x Half Sovereign was worth half a Pound, ten Shillings or 120 Pence.
1 x Sovereign was worth twice that much or One Pound.
From 1817 onwards Half Sovereigns and Sovereigns were made from 22 carat gold from Guinea and as a result their real worth was the current gold price.
20 x One Shilling was One Pound and hence 2 x 10 Shilling banknotes also equaled a One Pound banknote.

Five Pounds, Ten Pounds, Twenty Pounds, 50 Pounds and 100 Pounds are self-explanatory.
Then just to add the cherry on top of all this when the head is already spinning we had Guineas. One Guinea equalled One Pound and One Shilling. Five Guineas therefore equalled Five Pounds and five Shillings..

If you look back on the historical documents of the day you can see that a lot of professionals such as accountants and solicitors chose to do their billing in Guineas. It made the bill look smaller than it actually was. Hotels used it as it looked a lot more up market. In a way it was similar to the modern marketing ploy of using $1.99 instead of $2.00.

Please do not ask me to do division using this system as I really don’t think my mind could cope with it. Let us all be ever so grateful that on the 14th of February 1966 we left it all behind for decimalization. This day was affectionately called “D-Day”, nothing to do with the one from the Second World War but “Decimal Day”. 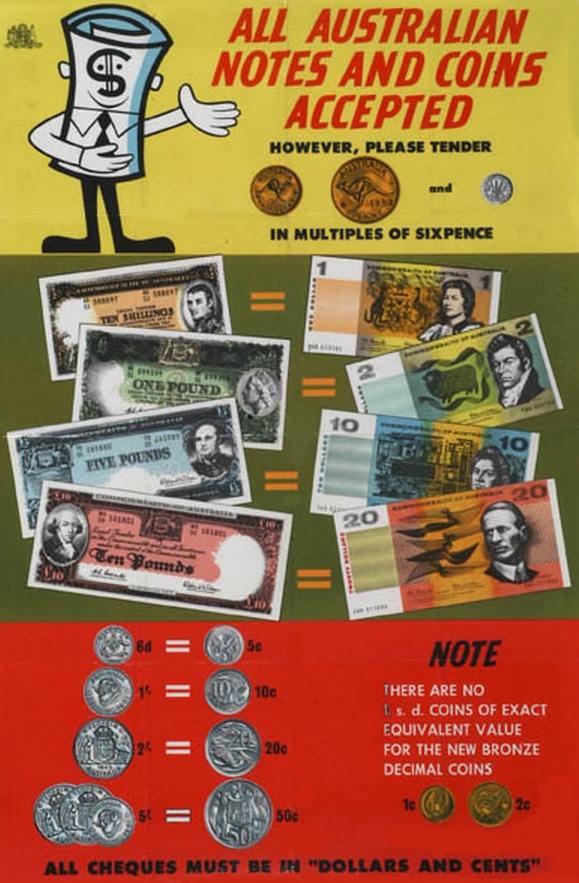 A poster with the new currency values

There were four note denominations released in the first issue of decimal currency notes. The old ten-shilling note was converted to a one-dollar note and the pound to a two-dollar note. Then came the five-dollar note and a ten dollar note to replace the five pounds and ten pounds notes. The new paper money was extremely colorful by comparison to the dull green-blue and brown reds of the Pounds. Each of the new currency notes were a little larger in size the higher the value of the note.  A book was also issued by the Royal Australian Mint to assist with the change over. 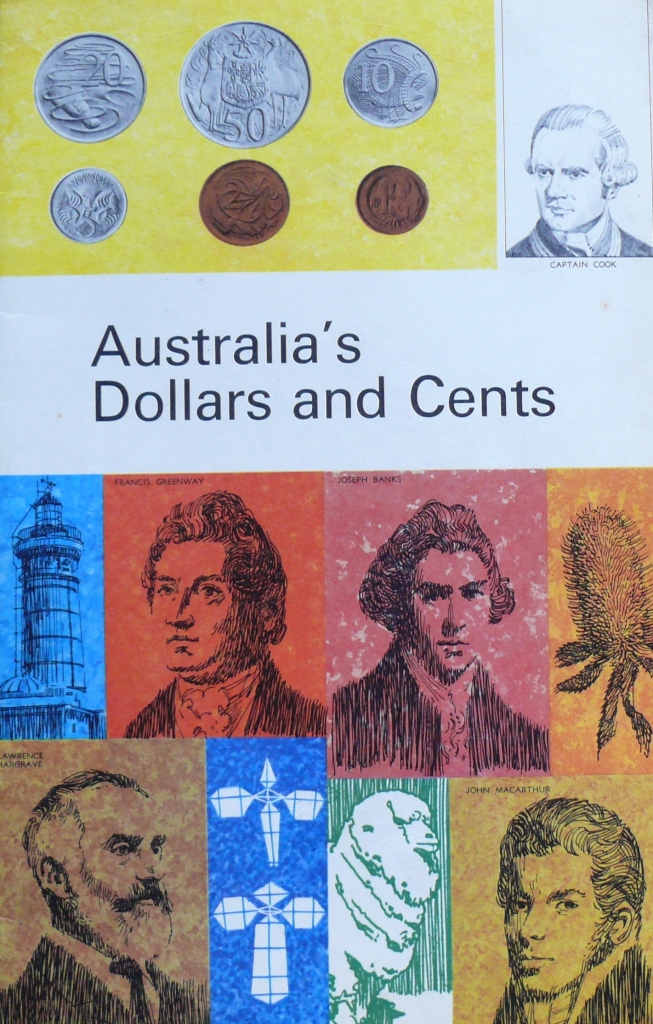 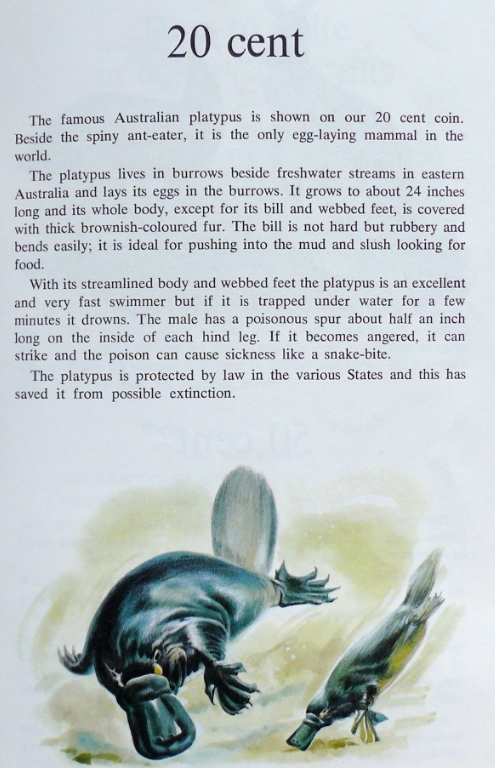 From the currency handover booklet

The following table shows the conversion of common denominations of coins of the £sd system. 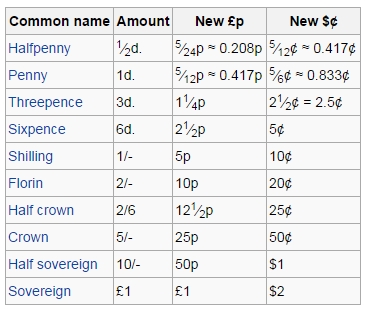 *Taken from Wikipedia for Educational Purposes

All in all the predecimal system was awkward and extremely difficult to work with by comparison to decimal currency. It created a lot of accountancy errors and was huge waste of time and money. For those of us who grew up and saw the use of both systems there is no doubt which one we would rather be using. The predecimal currency releases are still a highly enjoyable area of numismatics to collect, not only for the design aspect but also for their historical collectible nature. Their values of the banknotes and coins by comparison to other countries of the same period are extremely high.  Many people specialize in collecting nothing but pre 1966 banknotes and coins and in good grades as an investment portfolio they are second to none. Some coins and notes have recognized sums of several million dollars.

Since the decimal change over we have seen :

These 2 small films released at the time of the change over help to explain it all. If you know the music to “Click Go The Shears” then you can probably have a blog sing-a-long. Enjoy!

One thought on “Predecimal Currency in Australia”